Our Solar System - the planets

This week in Science we had some exciting items on our tables to put in order. We decided that the items (mainly fruit) represented each of the 8 planets and put them in order from the Sun.

We then took this outside to make a playground-scale model of the Solar System, learning the relative distances between each planet and those distances in relation to the Sun.

We then made our own mnemonics, such as My Very Educated Mother Just Served Us Nachos!

After that, we did 'Solar System Speed Dating' to find out interesting facts about each planet before making our own 'Solar System in your pocket'.

Lots of learning, participation and curiosity! 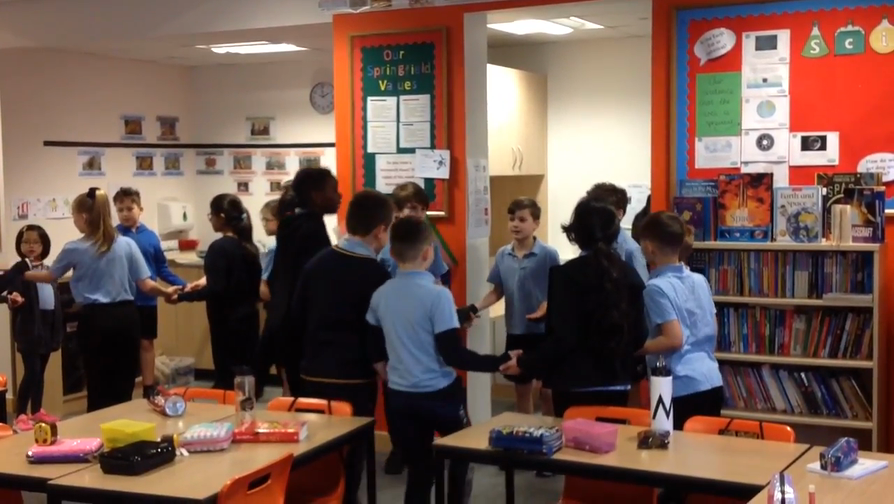 During Spanish this week, we practised the playground song 'Toma Tomate'. Here it is for you to enjoy!

Year 5 enjoyed a fun-filled Christmas party with lots of dancing and games. Thanks to all who made this possible!

This week we have been researching the 4 contenders to the throne in 1066 and their leadership qualities. We are going to use this research to create campaigns to argue why each contender should rightfully earn their title as King.

In computing, we have used Scratch to learn about algorithms and how to use coding to make a game. These are some examples of our finishing product - a maze game! We let different children in the class have a go at playing our games.

Today we have had GIST in to talk to us about road safety, especially in the case of lorries on the road. They told us how to be safe and demonstrated the blind spots that lorries have. We were surprised to learn the large distance it takes for a lorry to stop and turn corners but were very excited to sit in the driver's seat!
WOW 5 Hawking - Miss Landi is blown away with the exceptional effort that has been put into your Anglo-Saxon projects this half term. As ever, thank you to parents and carers for making this possible! Please see below photos from our exhibition which we did to showcase all our hard work.

In light of World Mental Health Day, we wrote about times/situations in which we felt excited, angry, relaxed, upset, worried, embarrassed, grateful and proud.

We discussed how important it was to talk about our feelings, and that it is OK to feel these emotions.

In Science, we measured the effect of air resistance by making parachutes and testing the way they fell. Different groups could change one thing about their parachute: size, shape, material. This meant they could measure these variables against the effects of air resistance.

Readers of the Week - Week 6

Readers of The Week 23rd September

This week's Readers of the Week are...

Hot Seating: We have been exploring the Norse Myth 'Thor Regains His Hammer'. In doing this, we have been putting ourselves into the shoes of some of the main characters in the myth during hot seating. This has allowed us to practise the skill infer.

Our Readers of the Week

Welcome to Year 5! You have all made an exceptional start to the year and Miss Landi is blown away with your effort. Keep it up! :)